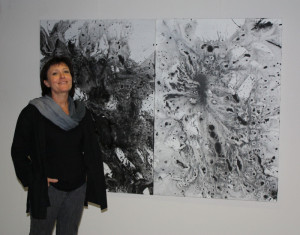 She was born in the desert of Mauritania (Western Africa) in 1959, where she spent 20 years, and now lives in the south of France.

During her youth, she has ever been preccupied by philosophic and aesthetic questions. The contemplation of such an arid and inhosptable land drove her in a philosophic way of Life based on meditation.

Later, when adult, she was appealed by Asia, expecially by Zen tradition and by ancient paintings of landscape where she found calm, beauty and proximity with the Nature.

She shows her paintings in France, Spain, Italy, Japan and Korea, and, by  the way, builds a bridge between Orient and Occident.

A Black and White Marriage between painting and poetry

The Gallery Saint Pierre is presenting Odile Cariteau's black and white pictorial works until the 14th of April: a trip at the heart of a calm and poetic breaking.

Calm foaming, white black, still movement, zen fury, vigorous serenity, restrained violence... Since 2000, all these oxymorons have been characteristic of Odile Cariteau's acrylics on canvas. After a period when she painted in colours, in  "Ressac " (Backwash), she gives up warm colour palettes to take refuge in a black and white world imbued with contrasts. Nevertheless, the visitor is immediatly
swallowed up by a flood of shaded colours that invites him to discover the artist's telluric world. Between ground, stones, waters and wind, the works create « a world which teems with all shades ranging from pearly whites to several shapes of crepuscular greys, to reach its peak with a magnificent black with tiny variants
and numerous sonorities », as the artist Paul Duchein said about Odile Cariteau's work. Then the flaming or moderate black springs into a coloured focus in a full of contrasts flood thanks to the light of the natural and abstract elements put down in painting.

Is it a boiling volcano, a storm in the ocean or a hurricane on the « Ile » (Island)? Probably a little bit of all that at the same time, because Odile Cariteau, who lives and works in Montauban, France, was born in 1959, in Atar, Mauritania, and has
lived there for about twenty years. Located in the west of Sahara, this African country is a link between the desert and the Atlantic Ocean. This striking contrast seems to reborn metaphysically in the artist's canvas. The black colour, in harmony with nature, spurts out of every direction in the din of a raging sea in which
huge and foamy waves curl up endlessly. Is it the visible inner progression of the artist and, by extension, of mankind? « In his wandering trip on earth, man discovers, runs across and maps out the writing of his life. Having reached the end of his trip, he will have to go back to the human world and live his life as he wrote it, unless he gets a « Souffle » (Breathe), a favourable wind that will help him to reach this « Ile » (Island), this land, this stone, with which he has many bonds and where he will ge gone », said Odile Cariteau and added: « He will have discovered this point, this original and heavenly center that he had left a certain time in order to better go back there ».

« Fragments d'Ile » (Pieces of Island), « Souffle » (Breathe), «Espaces Ecriture» (Writing Spaces)... in these different canvases with poetic titles, the vigorous discharges of black colours stimulate the imagination and propose a rich and sweet conjunction on the borders of Zen philosophy. The artist feels close
to the Taoist culture and transports the visitor to an initiatory and spritual journey in harmony with Nature.
« Ressac » (Backwash), a profound and poetic exhibition, is the visible and contrasting projection of an inner thinking with certain tranquility and vibrating energy

Deeply marked by one of the most primary and picturesque country of Africa where she spent her childhood and teenage years, Odile Cariteau is first interested by the various definitions of universal symbols, especially through oriental religions and

From those researches, at first sight scientific, she finds a purely spiritual progress she can naturally apply to her creation's work. Then, the study of the Torah's ancient Hebraic characters, based on the « anagogie » of the square and later the study of Chan, Taï Ji Quan and Qi Gong seems to be a way to penetrate the mystery
of our Genesis and of the World's understanding. These studies influence too her plastic aspirations and her work's compositions.

Mainly using the canvas as material, but also stone, brick, tile and ceramic, especially the raku, the artist lets spatters and informal blobs - often black and grey - run on the surface, so that their structure reminds us the elements of nature –
the sky, the wind, the stars – and as well the reflections of the man in perpetual
search of wisdom.

Following the example of Zao-Wou-Ki, Gao Xingjian or, near to us, Turner and
Mathieu, Cariteau says something to us with an « ardent tact », because on this side of linear, dreamlike and even expressionist dynamism, the oriental succulence of a perfect mastery of the artist's brushwork is essential.

The fate of incarnations gets us to become guests of the Earth. We are born from Nature and we go back to It without ever having been conscious, during this life on Earth, of the environment in which we move. The spread of the consciousness and
the fulfilment of our own nature goes through the spread of our personal experiences, our feelings about Nature, and the forevermore accepted realization of our entire disappearence and the fusion with It. We exist as individuals only because we exist as a whole. So we can wonder why man is still so full of himself.

Nature delivers messages to us in order to initiate us. It represents a huge and infinite temple that enables us to reach our real greatness: to be Nothing, just a constituent element of a cosmic world. So it is up to us live to with the greatest respect of what surrounds us.

Thanks to his work and thought, the painter himself follows the invisible threads that wave the universe. He has access to the back of the weft and goes back from his trips in countries located Elsewhere imbued with extraordinary visions. Then he can snatch up his paintbrush, he is the reflection of the sky and the emergence of the ground, the meeting point between these two worlds. He starts resonating with Nature and the Universe, and practising this search for harmony provides him with inner peace. He is the medium who speaks to us without stopping about Life and its mystery.